As everywhere in the world, weddings are the occasion for a big celebration in Egypt. Weddings in expensive hotels in this country are sometimes shown on television. However my own experiences were with weddings of the Egyptian lower and middle class. I was a guest at celebrations in the suburbs of Aswan and in a hotel in Cairo.

This is not a scientifical research paper on Egyptian wedding rituals (which I did not see from beginning to end) and they can be different depending upon region, financial possibilities and Western influence.

Nevertheless some general background information first: The Egyptian wedding procession is called Zeffa. During this the bride and groom are brought to the wedding party in the evening, led by a music band. For this procession a particular, rather slowly played rhythm is used: Dum tata tak tak dum tak tak. The drums playing this rhythm will tell you from far away, where a wedding is taking place. After the procession the wedding couple sits down on the typical Egyptian wedding throne (Kosha), from which they only rarely get up for the remainder of the evening. 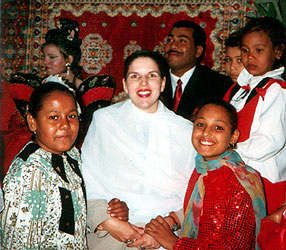 We met Adel, a young Coptic man, in a papyrus shop. He invited us to a wedding in his village outside Aswan and we ended up in a court filled with people. As it is the custom, I joined the women while my boyfriend disapeared somewhere in the crowd of men. As we were in the midst of all these people and chaos it was not easy to find out at which point of the wedding celebration we had joined the party.

The kosha had been built up against a wall, bride and groom were already sitting there. Contrary to the guests, who were dressed in a mostly traditional way, the couple was wearing Western clothes. The bride wore a dress with such large shoulders that she could have starred in "Dynasty" and her hair was piled up high.

After some time I had the feeling that someone was pulling my hair. I turned around and found out that it were the Egyptian women around me. In this village, were hardly ever a tourist can be seen, my straight, dark blond hair was clearly a curiosity that one had to feel to believe!
Anyway, we soon felt like animals in a zoo... Oh yes, it was not us who had come to watch the Egyptians - we had been invited to add a bit of glamour to the party as an exotic attraction! We had to pose for many pictures and shake hundreds of hands. 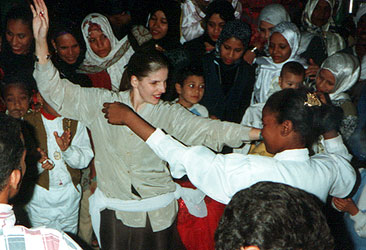 Then someone had found a drum and started to play. The rumour had spread that I was a dancer and so I was of course requested to show something. Dancing there in the court of a little village with naked feet on the earthy ground, I had sort of a "back to the roots" feeling.

After this we were asked inside the house to sit down at a big table for dinner. I was glad that we had already eaten at the hotel because mutton is not really my taste... I think, I told them that I was a vegetarian and ate only beans.

During our next visit at the papyrus shop Adel told us that our presence was wished for at another wedding. Of course we went there.

This time we had to wait at his place first for the wedding couple to arrive. Then the celebration went on like the first time.

By the way, if you think how romantic it would be to shine as a dancer at a wedding with marvellous native musicians and an attentive audience, I will have to disappoint you. Although this time I was even placed on a pedestal so that everyone could see me, the two tabla players were far from professional and sometimes got the rhythm wrong. And only half of the guests were even watching me - I was just a part of the general chaos.

And of course we had to pose again for pictures with the wedding couple and various family members. 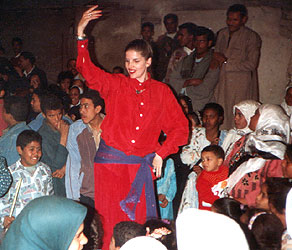 I had hardly arrived at the hotel and had been pleased about the fact that it was in a quiet neighbourhood, when a big noise started in front of the building. Then I heard the drums playing the Zeffa rhythm. I immediately grabed my camera and rushed down into the hall, where the wedding procession had already arrived.

The hotel clearly had a contract with these musicians because the performance at the hotel always happened in the same way for this wedding and the two others that I would see during the week:

After the arrival of the band and the guests the wedding couple entered either through the door or down the stairs of the first floor to the sound of the Egyptian "wedding march" and stopped in the middle. Now the first people started to dance around them - and after people had noticed how I clapped along to the rhythm with great enthusiasm, they soon shoved me to the centre to dance along. 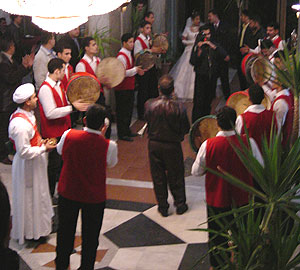 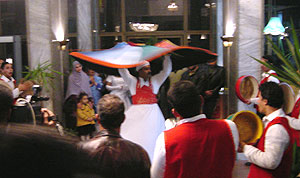 Then it was time for the Tanura dancer who spinned for a really long time and did some tricks with his skirt. At the end of his show, while he was still turning, he undid his turban and rolled it up in the shape of a baby, which he finally put in the arms of the groom.

The couple was placed on two chairs. Incense was carried around them and then they circled each other with the incense container. 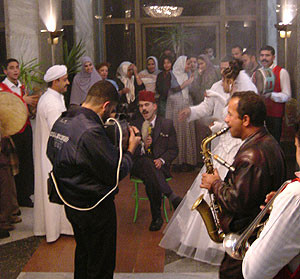 After more music and dancing the procession went into the restaurant and the name of Allah was sung.

During all this the video camera was always close by. Some people sat down earlier in the restaurant and watched the happenings in the hall on the screen - this way they could see more as if they had been standing in the crowd!

While the couple sat down on the kosha, a DJ played Arabic pop music. Then they offered each other a glass of juice and finally drank from the same glass. Now the husband could kiss his new wife.

After the couple had done a wedding dance, the party really started with a lot of dancing to pop music. Interestingly, mainly the young men danced like crazy and moved their hips impressingly. There seemed to by a competition about who was the better dancer.

The girls and women mostly stood and watched. Only a few who felt more adventurous dared to go on the dance floor. Probably most couldn't really let go in front of all the family. 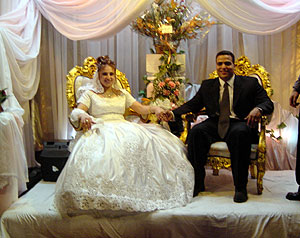 However, people also danced in every corner of the restaurant. Especially the children were encouraged to dance. 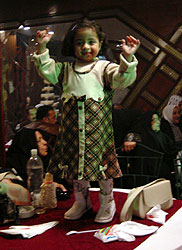 Quite soon a few young girls took my hands and pulled me here and there to show me something or someone. All this in sign language of course, because my Arabic only consists of about 15 words. Only occasionally I sat with a guest who gave me some explanations in English. 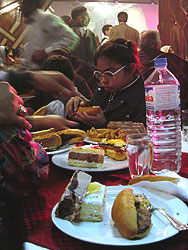 If I haven't mentioned food yet, there is a reason. For about an hour after the arrival in the restaurant, nothing was served. Only then the waiters brought plates with sandwiches and cake to the tables. Everyone just grabbed something from the nearest plate. Along with this there were soft drinks and water.

The party went on with most elders sitting and talking and the young ones dancing.

Around midnight most guests left and by 1 am the party ended with more singing of Allah's name (from tape).

As you might have noticed, none of these weddings had a professional female dancer. Maybe for economical reasons but maybe also not to upset the more conservative guests.

Get invited to a wedding

It is rather easy to be invited to a wedding in Egypt. If you are staying in a hotel that is popular for wedding celebrations, you only have to listen to the drums. Place yourself in the crowd of guests and clap along. And if you also show a happy face you will gladly be included in the celebrations. Another possibility is to befriend Egyptians and ask them courteously if you could watch a wedding. There is always someone getting married...

After the first wedding in Cairo I had been invited to the others by the hotel manager (one wedding was that of his own son).

Please note: Of course also Egyptians like it when you dress nicely for a wedding. A conservative style of clothing is always right. Participate in the celebrations without showing off too much. After all you are at a strangers' party.