From ritual to fashion: Bindis

They're one thing that comes automatically to your mind when you're thinking of Indian women: Bindis (also Sindoor, Tikka, Pottu, Tilak...).

Nowadays you can see pop stars wearing bindis and they're also sold around here in trendy shops (at sometimes horrendous prices).

When I first traveled to India in 1995 I brought home a whole collection and I like to wear them especially for going out. To my surprise I've been asked one day to which Goa family I belonged. Well, I had never heard of Goa-techno music until then - and I'm still not a fan...

Lately it has also become fashionable among oriental dancers to perform with glittery bindis.

But where does this special jewelry come from and what does it mean? 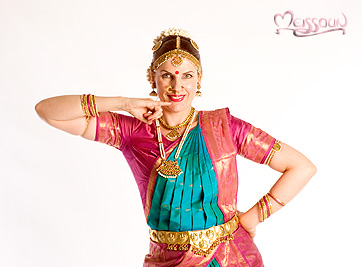 Ever since humans existed they've always adorned their bodies and faces with colour. Also in India.

There are many explications for the meaning of the bindi. It's name comes from the Sanskrit word bindu (drop, point) and it's meant to be an auspicious symbol.

Depending on the region men as well as women paint their foreheads. Especially men show their religious preferences this way. For example 3 white stripes show a follower of Shiva. The application of kumkum powder is also part of religious rituals. It's not aesthetics that count here but the colour is put on the 3rd eye chakra to lead the attention on divine power and spiritual enlightenment.

For example a woman would end her morning prayers by applying first a dab of sandalwood paste in the middle of her forehead, then on top of this put a circle of vermilion red and on top a few grains of rice.

In earlier days, Kshatriya queens used to put a tilak on their husband's forehead to bring him luck in the battlefield or to greet him when coming home. You can still find this tradition as a way of welcoming guests.

The special bindi of the women developed through the wedding ritual of the Hindus. It was painted as a sign of the wife together with red powder on the top of her head. Still today it is a part of the bride's make-up. The red colour is meant to bring prosperity to her home, the dot makes her the keeper of welfare. And of course it shows the other people that this woman is no longer available... In northern India the bindi is still mostly a sign for a married woman, in the South it is worn by everybody, even small children.

Of course a bindi is also an important accessory for Indian dance - we don't even practice without one. Traditionally it is the red, round one. The dancers of old were not allowed to have husbands but they were kind of married to a god.

Kumkum powder is made of the leaves of an Indian flower and after some time was also produced as a liquid. Soon many different colours were available and women started to match their bindis with their saris.

In the 18th century rich Indian women could afford glamorous Bindis made of gold, diamonds and pearls. With these sophisticated styles the meaning also changed from religious to fashionable.

The bindi of wifes still is mostly a red dot and conservative women still use kumkum for it. But the self-adhesive "fancy bindis" are becoming more popular and nowadays they are matched to the colours of clothing

Nowadays bindis are produced in all sizes and of different materials. There are simple ones and those with little mirrors, shells and peals or the more elaborate ones with glittering stones.

The bindi on the forehead is supposed to enchant the lover... Even poems have been written through the times about a ladie's beautiful bindis.

Some modern bindis are made of holographic materials or glow in the dark. Shapes vary from drops to flowers, animals etc. There are even bindis in the shape of dinosaurs!

Bindis are now sometimes put on other parts of the bodies. They are then called bodydots. There are large collections of navel bindis for example.

So this is how an ancient art of body adornment has developed. And although people are talking about a "new trend" in the West, just because some pop singers can bee seen on MTV wearing bindis (see also henna mehndi...), it has always been a part of Indian culture for ages and will persist for just as long.

As mentioned before, prices for bindis in some hip boutiques are in no relations to those in India. For some simple bindis a whole Indian family could go out eating... But if you find the way into an Indian or Tamil shop, you will pay much less.