This article has been written about 1997. Unfortunately Nelly Mazloum passed away on 21th February 2003.

One of the most amazing personalities I have met during my Oriental dance education is certainly Nelly Mazloum, also called "the legend". Whoever attended to one of her workshops has certainly been impressed with the energy this women has although she's already in her seventies.

After a training for western ballet in her early years, she became interested in Egyptian dance forms. She traveled the whole country for many years, from the desert to the villages, souks, cities, always looking for new dance movements. Finally, she decided to found a dance ensemble and after 2 years of hard work they staged a show with Egyptian folklore, the first of it's kind.

Besides her work with the dance group she also appeared in many movies. When the political climate in Egypt changed and culture wasn't valued as before, Nelly emigrated to Greece where she still lives and teaches.

During all these years Nelly developed her own systematic way of teaching. She insists very much on proper technique and also created some diagrams to illustrate it. Besides this she worked out the "Vivicorporeal"method, a kind of gymnastic to support Oriental Dance.

Her classes are a special experience. She doesn't just teach steps and movements but also tells about the meaning of gestures, the music and general background. If necessary, she doesn't hesitate to tell examples of the most intimate kind. After all, she says, she's old enough now to tell us everything we need to know. A central point is also the attitude of the women in the Orient who isn't just a victim but has her own way to get what she wants. And here, Nelly thinks that soft is by far not the same as weak.

Nelly is a very strong personality who enjoys the worldly pleasures (she had several husbands) as much as being interested in the mystical side of life. She spent a lot of time to learn about the Sufi tradition and meditation.

One cannot forget to mention Nelly's daughter Marhaba, who is always with her when touring through the world. Some years ago she only worked as a supporting assistant in the background. But nowadays Nelly has handed over the task of "drilling" to her. Which means that after studying the movements we will repeat the sequence many times with Marhaba. She corrects and encourages - and suddenly she, who is normally so quiet, comes out and shows that she has certainly got a lot of her mother's temperament.

Watch a video that not only shows Nelly dancing but also teaching with her wit and inspiration: 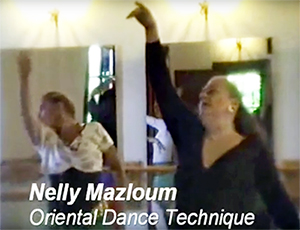