One of the questions I have heard the most is: "How come you do oriental dance?" Well, that's a long story... Normally I tell people a short version, because after telling it about 200 times I can't hear it anymore.

But here I tell you all about it, the "multi extended version with bonus track" of "MEISSOUN meets Oriental dance".

As it happens with many love stories - you meet, you loose each other. For me this was the case when we spent our family vacation in Tunisia. By the time I was sweet sixteen and didn't have an idea about the Orient. For me it was much more important to see the sea for the first time in my life. I found it salty and full of jelly fish...

By that time, Tunisia was much less touristically developed. Which means that food was horrible. Most of the other guests were French which whom I trained my skills at pétanque. Well, you may ask, where does dance come in?

One evening there was this tourist folklore show. A group showed some dances that were mostly about the daily village life, stuff with baskets or so. Then it was announced that there was going to be a Tunisian wedding. But a bride and groom were needed. And somehow, whenever people need to pick somebody from the audience, they take me. So I found myself a Tunisian bride - with my brother as the groom... They took us to a room where they dressed us. To pass their time, the dancers practices their steps - and I could still slap myself for not asking them to show me how they did it! As it was, I just watched them attentively. Well and that was it for the time.

Here are two pictures, one in "normal" clothes, one in wedding dresses. 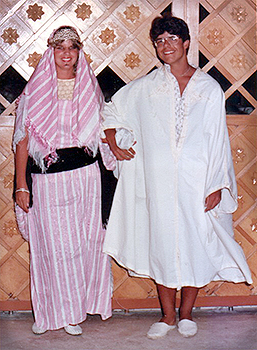 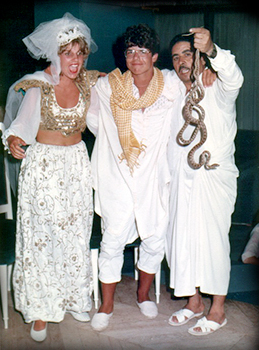 No, I am not afraid of snakes! Probably just surprised...

5 years later I travelled to Side (South of Turkey) with a friend of mine. The hotel offered various amusements during the day like beach volleyball. I'm not really good with balls - but I saw on the program, that there was a daily lesson of "belly dance". And I made sure not to miss that one! The teacher was a modern young woman with short hair, she seemed to be the sport teacher of the local school. I turned out to be more or less her only student. Other women came to the lessons, moved around awkwardly and dissapeared. But I didn't miss a lesson!

Of course we also went on some of those excursions. One of them was a boat trip on the near river. During one of the stops a "danzös" came aboard. One of the well known young women with tiny costumes who shake their thing with a rather bored expression and collect tips. When the guests were asked to dance with her, nothing could stop me to show off my new dance movements. The Tunisian hip twists that came from somewhere deep in my memory were looked at with amusement by the Turks, but I had my applause - and the dancer woke up from her routine and put more energy in her show.

A few days later my dance teacher took me by the hand. I was to follow her to Club Robinson where she also taught and with only few students as in my hotel. This was why I should take part in the weekly guest show as advertisement for her lessons. First we drove to her home where I waited quite a while together with her young cousin who would also dance at the show.

As the evening came we drove to Club Robinson. Well, there are some parts of my show that make me cringe today! But I promised to tell you EVERYTHING. Well, they put a glass of raki in the front of my hip scarf and made a guest try to drink out of it. Of course I had to move my hips to make it difficult for him. My goodness! But this was the organisers' idea of fun...

Besides this I had a thing for too short dance skirts at the time - and a perm! 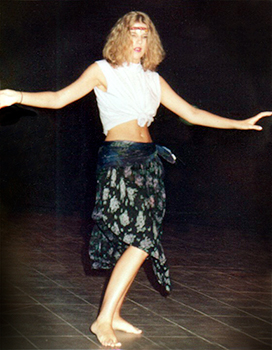 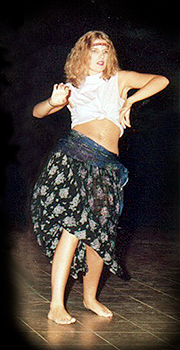 But I managed my hip sways quite well, didn't I?

The start of a wonderful friendship

After these two encounters I didn't want to part from oriental dance. I came back from holiday and decided to keep on learning. First I bought two CDs to practice - the wrong ones of course, that I never use anymore. But I found a good teacher, Viola Layali Römer, with whom I took classes for the next 5 years.

My first "real" performance at the Volkshaus Zurich. That's my teacher Layali in the background. 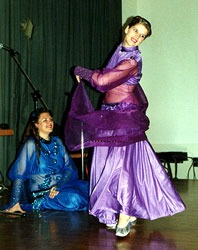 As you can see in the gallery, my skirts and hair have become longer since then. But I'm still not a specialist in Tunisian dance...